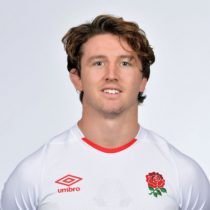 Curry made his professional debut against Scarlets on the 15th October 2016 in the European Champions Cup, becoming the fourth-youngest English player and youngest Sale Sharks player to have played in the competition.

He is the twin brother of Sale Sharks flanker Ben Curry, with whom he was named in the England U20 squad for the 2016/17 season, having previously represented England U18.

In the 2017 season, him and his brother became only the fourth set of twins to play side-by-side in the Premiership. Tom also became the youngest player ever to score a try in the Premiership when he touched down at Bristol before signing a 5-year deal with the Sale in February 2017.

Curry earned his first test cap during the tour of Argentina in the summer of 2017 and became a regular in the test squad.

Curry had an outstanding Six Nations starting in all five matches and made the most tackles of any player during the 2019 Six Nations with 86. He also won the fourth most turnovers (5). This performance ultimately sealed his place in the Rugby World Cup squad.

He formed a formidable partnership with Sam Underhill at the World Cup with Eddie Jones christening them as the "kamikaze kids". Curry started 6 games at the World Cup, including the semi-final win over New Zealand and the loss in the final against the Springboks, taking his cap tally to 19 while also earning a nomination for World Player of the Year.

The highly-rated flanker returned to the England squad for the 2020 Six Nations where he looked to add to his 5 caps in the competition.