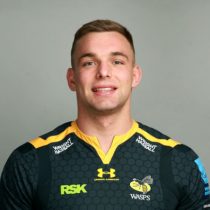 Second-row Cardall was among six other NTU students who signed for the Nottingham at the beginning of the 2016/17 season, combining his studies with playing at Lady Bay.

Cardall joined Wasps Academy for the 2018/19 season after Nottingham and earned valuable Championship experience.
He was promoted to the First team squad after playing all ten games in the Premiership Shield.