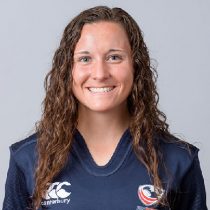 Tess Feury picked up rugby when she was four years old after her dad played through college and started a flag rugby team in the local area for Feury and her brothers to learn the sport. A high school varsity soccer player for four years, Feury earned All New Jersey State honors alongside a decorated career as an age-grade rugby player.

In July of 2016, Feury earned her first cap with the U.S. Women's National Team in 15s against England and made her debut with the USA Women's Sevens in 2017 at Claremont Ferrand Sevens. Also in 2017, Feury was selected for the Women's Rugby World Cup and was for the next two consecutive years nominated for the MA Sorenson Award -- one of the most prestigious awards in rugby.

She heads into the 2019 Women's Rugby Super Series with six test caps.