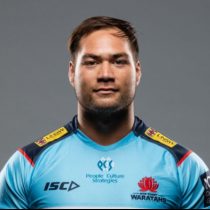 A second-rower in Rugby League for the Parramatta Eels, Moeroa was a star inside centre for Newington College, Australian Schoolboys and the Australian Sevens side that won Silver at the 2013 Youth Olympics in Sydney.

After making his debut as an 18-year old, Moeroa has earned more than 100 NRL (National Rugby League) appearances and has represented the Prime Minister’s XIII, the World All-Stars and the Cook Islands.

Following a six-year stint in rugby league, the former Australian Schoolboy has returned to learn from dual international Karmichael Hunt.

In July 2019, Moeroa made the switch to Rugby Union and signed a two-year deal with Waratahs and Rugby Australia until at least the end of the 2021 Super Rugby season.

Posing as a dangerous weapon in attack, Moeroa’s addition to the squad adds strength and size to the backline. He made his Super Rugby debut for the Waratahs' off the bench against the Blues in 2020.