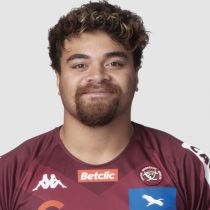 A strong and abrasive midfielder, Tani Vili made the move to the Clermont Academy in 2016 from Brive.

Selected for the French u20s in 2018, Vili helped the side to a World Rugby U20 World Championship Title.

His form during the 2020/21 season earned him a call up to the French senior team to tour Australia.

He didn't make his test debut against the Wallabies and will look to force his way back into the squad during the 2021/22 season with Clermont.