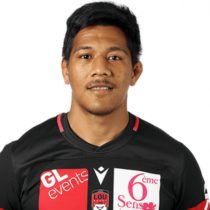 Halaifonua is a rangy Tongan second-row, currently playing in the TOP14 for Lyon.

The young second-row made only one appearance in the TOP14 during the 2016-17 season.

Halaifonua spent two seasons with Lyon before signing with RC Massy on loan for another two seasons.

As of the 2018/2019 Champions Cup, Halaifonua has had 3 Europen Cups appearances.