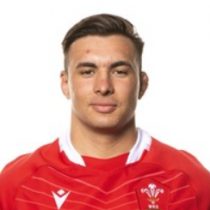 Taine Basham is a flanker, who made his debut for the Dragons regional team in 2017 having previously played for the Dragons academy, Bedwas RFC and Cross Keys RFC. The dynamic forward, who started out at junior level with Talywain RFC and has been developed in the Dragons Academy. He’s the great, great-grandson of a Welsh boxing legend, Johnny Basham.

Basham, who hails from Talywain, just a few miles north of Pontypool, in the Torfaen borough area of Gwent, made his senior debut for the region in the Anglo-Welsh Cup clash with Scarlets in January 2018.

He is one of the rising stars at Dragons after another eye-catching season in 2018/19 and was included in the Wales U20 Six Nations squad in 2019.

In November 2019, he was named in Wales 35 man squad as one of 5 uncapped players that would take on the Barbarians.

February 2020 saw him being called into the Wales squad ahead of the side's 2020 Six Nations Round 2 clash with Ireland. Basham, who has played for both Bedwas and Cross Keys in the Premiership, made nine appearances in the 2018/19 season and was named the Young Player of the Season at the region's end-of-season awards.

Bashman made his test debut against Canada in July 2021.

On 25 November 2021, the talented product of the successful Dragons Academy system signed a new long-term contract with the Dragons.

At the time of his signing, Basham already has 53 senior appearances for the region, scoring 12 tries, since his debut in 2018. The Wales international has earned seven caps for his country since making his debut .