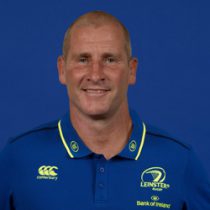 Lancaster was born in Penrith, Cumberland. He grew up in the village of Culgaith, where he was sent to St. Bees School. He started his rugby playing career at the school playing for the 1st XV. He started in the front row as a hooker, although at the age of 15, he moved to flanker where he played his best rugby.

In 1991 Lancaster started playing for Headingley RFC. When Headingley merged with Roundhay RUFC, Lancaster joined the newly formed team Leeds RFU, where he would play the remainder of career. In 1998, he took a substantial leave from teaching to become a full-time professional rugby player with Leeds Tykes, of which he became the first Leeds player to play a century of games since the amalgamation of Headingley and Roundhay, and was named captain of newly branded team.

Through his Scottish mother he played for Scotland Students, Scotland U19 and Scotland U21. Lancaster was forced to retire from playing rugby aged 30 after he tore his hamstring off the bone completely.

Having been forced to retire due to injury at the age of 30, the qualified teacher moved into coaching and had roles with the Leeds Academy and Leeds Carnegie before being appointed as the RFU’s Head of Elite Player Development in 2008 which included coaching the England Saxons.

He was appointed to the role of England Head Coach in 2011 and led the team through four Six Nations campaigns and a Rugby World Cup in 2015. Lancaster's tenure as Head Coach has been praised for the overhaul and reformation of England's squad culture, which had resulted in much media attention to the team's off-field antics during the 2011 Rugby World Cup, which immediately preceded Lancaster's reign.

During the 2015 Rugby World Cup, Lancaster led England to their worst ever performance at a World Cup. England became the first English team, and the first former World Champions to be knocked out in the group stages of the tournament. Having beaten Fiji in the opening match 35–11, England went on to lose to both Wales, 28–25, and Australia 33–13.

Prior to joining Leinster Rugby as Senior Coach in September 2016, Lancaster had short term roles with the Atlanta Falcons, with British Cycling’s world-class performance programme, with the English FA and with Counties Manukau in the Mitre 10 Cup in New Zealand.

By May 2020 Lancaster had helped the club to two PRO14 titles and a Champions Cup title.