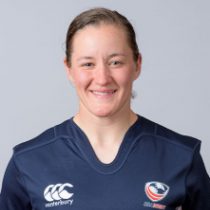 Stacey Bridges picked up rugby when she was 18 at Texas A&M University. She previously played softball for 12 years, as well as soccer and powerlifting for three years each and competed in all three sports at the varsity level in high school.

A Collegiate All-American from 2006-09, Bridges earned her first cap with the U.S. Women's National Team in 15s in August of 2009 against England. A year later she was selected for Women's Rugby World Cup 2010 and remained part of the Eagles player pool to earn selections for the 2014 World Cup as a reserve and 2017 World Cup where she helped the United States finish in fourth-place, their highest achievement since winning in 1991.

Bridges is an Assistant Coach for Dartmouth Women's Rugby, one of the top varsity rugby programs across the country. She owns both a Bachelor's and Masters degree in kinesiology.

Bridges has made 36 appearances for USA Women and will look to add to her tally during the Women's Rugby Super Series.