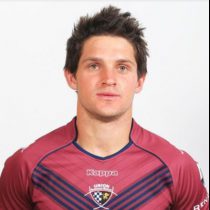 Hickey began his career at Auckland-based King’s College, a school that has produced several All Blacks legends including Ali Williams and Ian Kirkpatrick.

He captained the college's rugby and cricket 1st XV before quickly ascending into the senior rugby ranks, making his Auckland debut off the bench during the provincial side’s 59-16 win over Manawatu at Eden Park.

In his first year out of school, Hickey was named Auckland Club Rugby Player of the Year and made his Auckland debut in 2012.

He was the first choice first five-eighths for the New Zealand Under 20 team at the 2014 Junior World Championship and was named 2013 Auckland ITM Cup Player of the Year.

Hickey made his first appearance for the Blues in February 2014 and went onto make 16 appearances in Super Rugby, scoring 124 points in the process.

He announced his decision to join French Top 14 side Bordeaux-Begles in October 2015 after an impressive debut season with the Auckland based side.

He returned to play for Auckland in the Mitre 10 Cup missing the start of the 2016/17 season before starting his full-time spell in the TOP14, making 15 appearances in his debut season.

As of the 2018/2019 Champions Cup, Hickey has had 3 European Cups appearances scoring 21 points. In early 2020 he made his way back to New Zealand with an eye on playing Super Rugby and in July signed with the Hurricanes