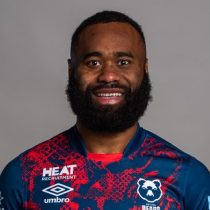 Hailing from the village of Somosomo in Taveuni, Radradra worked in the mines in Vatukoula and owned his own kava farm in Fiji.

He played amateur rugby union for the Vatukoula Rugby Union club, and was selected to represent the Fiji national U20s team at the 2011 IRB Junior World Championship, playing at centre in four matches.

Later the same year, Radradra represented the Fiji national rugby sevens team at the 2011 Dubai Sevens, where he was scouted by the Parramatta Eels.

Radradra made his NRL debut for the Eels in 2013 finishing the year with 7 matches and scoring 5 tries.

2015 saw him break a 61-year-old record by becoming the first player to score 2 or more tries in 5 consecutive games when he scored his double in the Eels' 28-16 win at ANZ Stadium.

Early into the 2016 season, he declared that he wanted to play international football for Australia after he found out he was qualified for Australia on residency grounds.

On 6 May, he made his debut for Australia against New Zealand in the Anzac Test. In his final year in NRL, Semi scored 22 tries in 26 appearances.

French club Toulon confirmed to have signed Radradra in November 2016 on a one year deal with an option for another year.

In September 2017, Radradra joined up with Toulon for the 2017-18 season, scoring his first try in the Champions Cup in October v Benetton Rugby.

In February 2018, Bordeaux revealed that they had secured Radradra's services on a two-year deal from next season. In May Radradra starred in the Barbarians historic 45-63 victory over England and was later named in the Fiji 7s squad for the London 7s. In September 2018, Radradra was nominated Best Player in the Top 14 for the 2017/18 season ahead of the 2018 Nuit du Rugby ceremony in France.

The box office Fijian lit up the Rugby World Cup and was one of the stars of the tournament in Japan taking his test cap tally to 10 scoring five tries, two of which in the World Cup.

During the World Cup, Radradra also averaged 100m a game, lighting up the competition pool stages with a string of sensational displays, including a brace against Georgia.