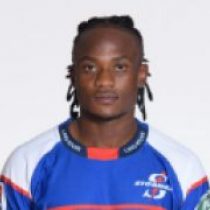 Prolific try scorer Seabelo Senatla is a player that will only get better for the Sevens.The winger represented South Africa in the JWC in 2013 and on the way equaled the record for the most tries scored in a JWC match scoring 4 tries against USA. The pacey winger already has a brilliant try for game ratio and could go on to be a legend for South Africa in Sevens Rugby.

His blistering pace earned him a WP contract in conjunction with his Sevens contract. He represented the Cape Town side in Super Rugby & Currie Cup. His 7's skills and work rate are the stand out in the 15 man game and his speed is something seldom seen on the rugby field.

Senatla was included in the 12-man squad for the 2016 Summer Olympics in Rio de Janeiro, and was named in the starting lineup for their first match of the competition against Spain, scoring a try as South Africa won the match 24–0

In late August the same year, Senatla signed a three-year three-part contract with Western Province Rugby and SARU, that allowed him to be available for both Western Province and the Stormers, should he not be representing a national team.

November 2016 saw the South African flyer win World Rugby Men's Sevens Player of the Year in association with HSBC, after crossing for 66 tries in 10 events in the 2015-16 series – the second-highest in the 17-year history of the series – and four at the Rio 2016 Olympic Games.

The all-time leading try-scorer for the Springbok Sevens, Senatla committed to a two-year contract extension with Western Province in April 2021.