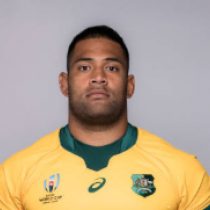 Son of former Canterbury and Samoan prop David Sio, Scott has carved out a fantastic career in the front row with the Brumbies and Wallabies since he broke into the Brumbies squad in 2012.

A strong, hefty lad, Sio’s rise through the aged-grade national ranks has been remarkable. Sio made the move to the Brumbies prior to the 2012 Super Rugby season and made an immediate impression on new Head Coach Jake White, earning his debut in Round 6 against the Sharks at GIO Stadium.

He would go from strength to strength after his debut, establishing himself as the Brumbies first choice Loosehead in 2013 and helping the team to a famous victory over the British & Irish Lions as well as a Super Rugby Grand Final berth. His strong Brumbies form would earn him a Wallabies call up for the 2013 Rugby Championship, Sio made his debut against the All Blacks at ANZ Stadium in Sydney at the tender age of 23.

Sio's excellence in the scrum saw him become a regular for the Brumbies and a welcomed sight for the Wallabies, who had struggled in the pack before his surge to test level.

The loosehead form a stellar front row partnership with fellow Brumby and childhood mate Allan Alaalatoa with the pairing making Michael Cheika's Rugby World Cup squad in 2019 with Sio also making the 2015 squad that reached the final with Sio starting the final in 2015. At just 23 years of age in 2015, Scott Sio already had a half-ton of Brumbies caps to his name.

The powerful front ranked has become a regular for both club and country and following the Rugby World Cup Sio had earned 61 test caps, 51 of which coming in the starting XV.

He came into the 2020 Super Rugby season with 102 Super Rugby caps and added a further 5 before the season was called to a halt.