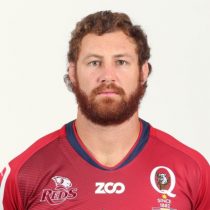 Although born in Perth, Scott’s mother was born in Fiji. This made the Wallaby flanker eligible to play for Fiji, before he made his debut for the Wallabies in their 56-19 win over France in 2010 at Stade de France in Paris.

The 2012 Super Rugby Player of the Year runner up is the ultimate backrow forward, with his exceptional vertical leap and robust nature in contact - which has caused havoc among his opposition since his debut in 2009.

Having experienced success at a young age with a Super Rugby title at the Queensland Reds, Scott has made his intentions clear - he wants to return to the Super Rugby summit with his new club in Melbourne.

Having played a good part of his international career from the Wallaby bench, Scott finished the season as the country’s optimum blind side flanker.

In 2015, Higginbotham left the Melbourne Rebels after signing a two-year contract with the NEC Green Rockets, based in Abiko, Chiba, Japan.

He signed a three-year contract in 2016 to return to the Queensland Reds for the 2017 Super Rugby season, having made 110 Super Rugby appearances, scoring 160 points since his debut in 2008.

In May 2017, Scott was called into the Wallabies squad for the June internationals, where he added to his 32 caps.

One of the most experienced members of the current Queensland squad with 123 caps, Higginbotham was appointed as the club's captain for the 2018/19 season. Ahead of the 2018 season Higginbotham has scored 37 tries in 123 Super Rugby appearances.