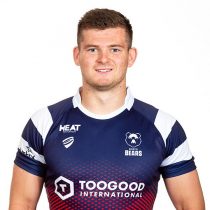 Graham signed professional terms with the Bristol Bears Academy after an impressive trial period with the club.

The Chippenham RFC product - who also represented Massey RFC in New Zealand - burst onto the scene in the 2017/18 B&I Cup before penning professional terms with the club.

In his debut season, Graham helped Bristol to the Championship title.

During his time with the Bears, he made eight first-team appearances, scoring on debut against Leinster A in the British & Irish Cup, as well as making 12 appearances for Bristol A in the Premiership Rugby shield.

After impressing in Bristol’s 2017/18 Championship winning side, Graham enjoyed a loan spell with Hartpury in 2019. He featured prominently after Christmas as the Gloucester-based side turned around their early season form to stave off relegation.

Capable across the whole back-row, Graham left the Bears to join Championship side Doncaster Knights in June 2020.