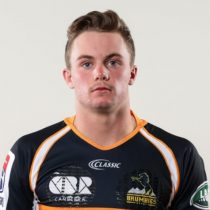 Ryan Lonergan is a young scrumhalf with a massive future and will be looking to build on a solid debut season with the Brumbies. Lonergan announced himself to rugby fans Australia wide as a 17-year old, the schoolboy putting in a string of sensational performances for the Brumbies in the inaugural Super U20’s competition in 2016.

His strong display during the competition put him on the radar of coaches everywhere and, after the youngster backed it up at the National Schoolboys Carnival with the ACT, he was swooped up by the Brumbies on a Development Contract. He represented the Australian Schoolboys in the same year and was impressive, being named in the side’s best players in every one of his appearances.

After a full pre-season with the Brumbies Lonergan excelled in the 2017 Super U20’s competition, the scrumhalf again showing why he is considered one of the most talented players in Australia. Injury setbacks ruled Lonergan out of competing with the Australian U20’s in Georgia but the season was not lost for the youngster, Lonergan making his Super Rugby debut for the Brumbies against the Chiefs in Hamilton.

In July 2018, he signed a new two-year deal with the Brumbies. The older Lonergan, his younger brother Lachlan recently joined him in the Brumbies senior squad, enjoyed an excellent 2019 National Rugby Championship campaign, kicking well from the tee and following on from a magnificent Griffin Legal John I Dent Cup with the Tuggeranong Vikings.

His goalkicking ability is well-known, he strikes the ball sweetly from the tee and out of hand, and that is an added bow to an all-round scrumhalf game that is improving year on year.

Lonergan kicked his first Super Rugby points in 2019, a conversion against the Reds at GIO Stadium, one of five appearances he made as the team reached the semi-finals. Highly regarded, Lonergan could well be set for a breakthrough year at Super Rugby level should his rapid ascent continue.

He entered the 2020 Super Rugby season with 6 caps to his name but quickly doubled his tally before the competition was brought to a halt.