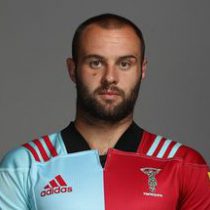 The talented youngster began his rugby at Hayward Heath RFC, but has since become entrenched in Harlequins, passing through the academy system. The fullback has some speed about him and has made try-scoring a habit in Quins colours.

He has represented England at Under-18 level and has the ability to stay calm under pressure at the back. His speed and try-scoring performances mean that he is also capable of playing out on the wing, although his best position is undoubtedly in the No.15 jersey.

The 2011/12 season saw Chisholm make his first Premiership start in the opener against London Irish, playing on the wing.

Ross, the older brother of squad member James, is an electric and versatile back three player who has made close to 80 appearances for the Club since his debut in 2009.

His development has been severely hampered by serious injuries which have limited his chances to play for the 1st XV.

Chisholm made a strong come back in the 2015/16 season, he scored two tries in front of 70,718 crowd at Twickenham Stadium in the Big Game 9 fixture against Gloucester.

On 26 April 2017, it was announced that Chisholm re-signed for Harlequins. Chisholm has been with Quins for more than a decade after coming through their academy system and has played more than 100 times for the first team.