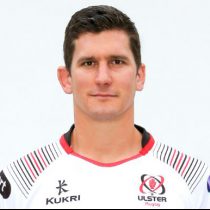 The former Stormers back-row signed for Ulster in 2008. Diack is renowned for his swashbuckling runs and ball distribution and has been an important part of Ulster’s squad since he signed.

In 2011, after spending the necessary three years in the country, Diack became eligible for Ireland. He made his first appearance for Ireland when he was picked for the June Internationals in 2014 where he lined out against Argentina.

In 2015 he was included in the Irish 6 Nations Squad for the upcoming tournament. Having only played 2 Tests he will look to cement himself in the squad ahead of the Rugby World Cup.

Diack made 13 appearances scoring one try during the 2017/18 season before announcing his retirement at the end of the season.

The loose forward retires having made over 200 appearances for Ulster scoring 18 tries.