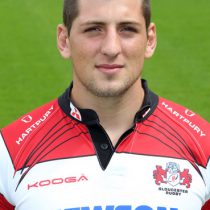 Langley represented Albion before the team was relegated from the championship despite an outstanding season for Langley, which led to a Player of the Season title.

The former Gloucester flanker signed for Nottingham from Plymouth back in April 2015.

Former student Langley finds himself back at Hartpury after studying as a college student before signing for Gloucester Rugby.

This season will not be Rob Langley’s first appearance in an RFC shirt after numerous games during his first year with Gloucester.