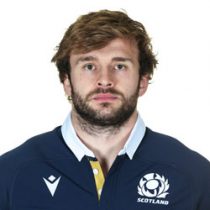 The giant lock is rated as one of Europe’s best second rows and is considered a certainty to go on the 2013 Lions tour to Australia.

Gray began his rugby career with Glasgow Hawks and Stirling County, before, in 2008, he signed his first professional contract with the Glasgow Warriors.

After four years with Glasgow, Gray signed for the Sale Sharks at the beginning of the 2012/2013 season. Having represented Scotland at every age group from U-17’s upwards, the Rutherglen man made his senior debut against France in the 2010 Six Nations.

In 2013 he was included in the Lions squad to tour Australia. Gray would have been many peoples first choice for the Lions second-row at the end of last season but the 2012/13 season has been a disappointing one for the former Glasgow Warrior.

Gray enjoyed a mixed tour, playing in five warm up games, but making just one substitute appearance over the course of the three tests against Australia.

On his return from Australia the talismanic Scot moved to French side Castres where he currently holds 36 caps as well as 51 caps for Scotland. It is no surprise that he has been included in the Scottish squad for the upcoming Six Nations Championship in 2016.

In May 2016, the 26-year-old agreed to a four-year contract with Toulouse after having received several offers from clubs around Europe.

Richie made his 60th appearance for Scotland when he joined brother, Jonny in the second row for the game against Georgia in the Autumn International.

In January 2017, he was included in Scotland's squad to compete in the 2017 Six Nations tournament. Gray has played in 27 Six Nations matches scoring 2 tries.

In May 2017, Gray was included in Gregor Townsend's summer tour squad, where he will look to add to his 64 caps. However, Richie was ruled out of the summer tour after suffering from an ongoing back complaint.

Following a review from the Scotland medical team it was deemed best for the player to return to his club for rest, recovery and rehabilitation over the summer period.