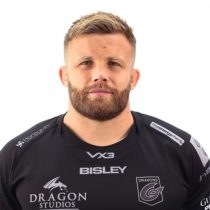 Rhys Lawrence was born in Hillingdon in England but grew up in Swansea and studied at the University. Hailing from Swansea, Lawrenece represented Wales at age-grade level.

Having played over 50 games Scarlets and Llanelli, he made the switch to Bristol where he featured in both games against future employers Ealing Trailfinders in that season.

The 2014/15 season saw Lawrence make the move to the Trailfinders where his performances have been both key and impressive. He became a key player for the West London club, as they finished second in the Championship behind his former club, Bristol. In May 2018, Lawrence signed for Dragons on a two-year deal.

Lawrence joined the Dragons for the 2018–19 season, making his senior team debut on 13 October 2018 as a replacement against Timișoara Saracens in the European Rugby Challenge Cup.