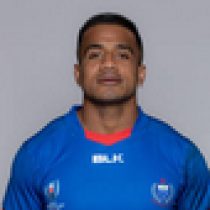 Lee-Lo – who has also played provincial rugby for Counties Manukau since 2009 - made his Super Rugby debut at the Hurricanes in 2013 and made 12 appearances, scoring one try, in his maiden season.

The then 25 year old was recalled in 2011 and the following year helped the side lift the ITM Cup Championship title, forming an effective partnership with Chiefs-bound team-mate Bundee Aki under the tutelage of coach and former Hurricanes captain Tana Umaga.

The powerful centre made his international debut for Samoa during the 2014 autumn tour against Canada and started against England at Twickenham.

The highly-rated Lee-Lo played for the Hurricanes in 2015, having re-signed for the Super Rugby giants from the Crusaders, and helped the franchise to the final against the Highlanders.

Cardiff Blues announced the signing of Super Rugby ace Rey Lee-Lo from the Hurricanes on a long-term deal in January 2015.

Lee-Lo has played 47 games for the Blues scoring 8 tries during his time in Cardiff.

As of the 2018/2019 Champions Cup, Lee-Lo has had 19 European Cups appearances scoring 2 tries and 10 points and in June he was included in the Samoa squad ahead of the Pacific Nations Cup