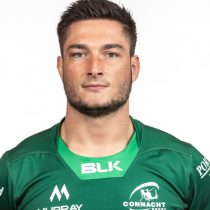 Having signed his first professional contract in December 2015, Connolly played in two Challenge Cup matches in the 2014/15 season, including the quarter-final against Gloucester.

October 2016 saw him extend his stay at Connacht and sign to remain at Sportsground until at least the summer of 2018.

In March 2018 he signed a new deal with Connacht that will see him remain at the club until the end of the 2018/19 season.

He still plies his trade with Connacht.