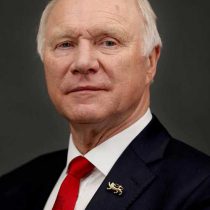 Born in Grassington in Yorkshire he played his club rugby for Headingley and Cambridge University where he won three Blues, and won 14 caps for England, whom he captained four times.

2017 Tour Manager John Spencer's connection with The British & Irish Lions stretches back to 1971, when he was part of the squad that claimed an historic Test series victory over the All Blacks.

He has been England's representative on the Lions board since 2008. He has also served on the Six Nations Council and the International Rugby Board.