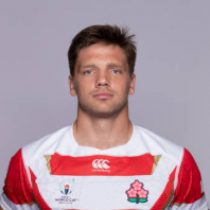 A relentless openside flanker who has a fantastic work rate on defence and is equally effective at the breakdown, Lappies Labuschange made his mark in South Africa featuring for the Cheetahs' youth sides while attending the famed Grey College in Bloemfontein.

After school the flanker went on to represent UFS Shimlas and captained side at times between 2009–2012. Labuschange broke into the Cheetahs' Currie Cup squad in 2011 and featured for the Emerging Cheetahs that same year before signing a Super Rugby contract for 2012.

He spent three seasons with the Bloemfontein outfit producing performances that put him on the fringe of the Springbok squad making regular appearances at the training camps but failed to force his way into the congested Springbok back row.

He made the switch to Pretoria signing for the Bulls ahead of the 2015 Super Rugby season having made over 20 appearances for the Cheetahs.

Again he continued to perform at the Bulls but was unable to earn his test debut with the Springbok side.

After two seasons at Loftus, Labuschange made the switch to Japan signing for Top League team Kubota Spears and went on to make a significant impact for the Sunwolves in their debut season of Super Rugby.

After getting his Japanese citizenship, Labuschagne was drafted into the wider Japanese squad and was named in the 31-man squad ahead of the 2019 Pacific Nations Cup where he made his debut.

He was named in the Brave Blossoms' squad for the 2019 Rugby World and captained them in their Pool A victory over Ireland.