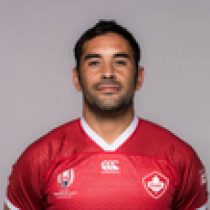 The busy scrum-half never shies away from contact and causes defences many problems when he backs himself with ball in hand. This form is mirrored in the Sevens game where Mack is a regular try-scorer for Canada. He was included in the 2013/14 Sevens Series 'Dream Team'.

Mack made his XVs debut in 2009 against Ireland in Vancouver. Continued good form for the national side saw him selected in the Canada squad for the 2015 Rugby World Cup.

Mack led the Seattle Seawolves to a championship for the inaugural 2018 Major League Rugby season becoming one of the few people in US history to win a championship joining other player-coach legends Bill Russell and Curly Lambeau.

He has been included in Canada's 2019 Pacific Nations Cup squad and will look to his 55 test caps.