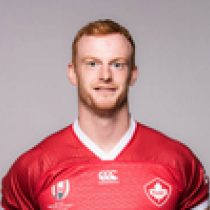 The former Royal School, Dungannon player was arguably in the form of his young life when an early season injury all but ended the 2015/16 campaign of the back who is at home at out-half, anywhere along the three-quarter line or at full-back.

With stunning pace and a solid defence Nelson is instinctively attack-minded, and he moved impressively through the Ireland U18 and U20 ranks as he won his first Ulster senior call-up as a teenager in 2011.

At the end of 2018/19 season after making 60 appearances for the province he announced he would be leaving Ulster.

Nelson was named in the Canada squad for the Pacific Nations Cup and qualifies for Canada through his grandmother and made his debut against the USA in the opening game where he played opposite fellow countryman AJ MacGinty.

Nelson was then named in Canada's squad for the 2019 Rugby World Cup.

After a post-RWC professional offer fell through, Nelson returned to local club Dungannon in All-Ireland Division 2B.

In March 2020, he agreed a deal with Seattle Seawolves for the remainder of the 2020 Major League Rugby.