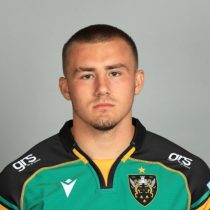 Son of Saints legend Jon, Ollie Sleightholme began his rugby career as a six-year-old at Northampton Old Scouts and quickly followed in his father’s footsteps – linking up with Saints for the first time when he was 13.
Continuing to rise through the ranks in Northampton, Sleightholme soon earned international honours, representing England in Rugby Sevens during the 2017 Commonwealth Youth Games in the Bahamas.

There he reached the gold medal match and despite scoring England’s try against Samoa, Sleightholme had to settle for a silver medal.

The wing had barely got his feet back on English soil before he was donning the Black, Green and Gold jersey for the 2017 Premiership Rugby Sevens, where Saints won the Bowl. And just weeks later, Sleightholme made his first senior appearance for Saints in a preseason friendly against Nottingham.

Named amongst the England Under-18s squad in February 2018, the prolific try-scorer crossed the whitewash on his international debut against Wales a month later.

Sleightholme enjoyed another appearance for Saints’ senior side as he featured in the 2018 Mobbs Memorial Match against the British Army, adding another try to his tally, before signing on with Saints Senior Academy ahead of the 2018/19 season.

The winger made his first-team debut against Bristol Bears in the Premiership Rugby Cup before taking just 15 seconds to score his first Northampton try on his Premiership debut against Wasps, and finishing his debut season with seven tries in as many appearances for the Club.

And Sleightholme made the jump to England Under-20s in 2019, featuring in the Six Nations – scoring tries against both France and Italy – before travelling to Argentina for the World Rugby U20 Championship where he twice crossed the whitewash in the Red Rose’s opening fixture with Ireland.