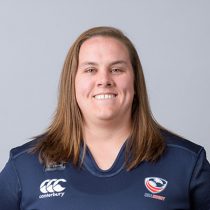 Nicole James picked up rugby when she was 19 after a hometown friend suggested it would be a great way for her to remain involved in sport and meet new people. James competed in a number of sports through her athletic career including football, softball, basketball, powerlifting, cross country and track & field.

In 2006 she was a State Champion in Powerlifting, Softball District Defensive MVP and named to the 2nd team All-District in football.

When she picked up rugby, James naturally excelled, earning Collegiate All-American honors in 2010 serving a multitude of club, collegiate and local rugby programs as Captain including Texas A&M rugby, Houston Athletic and more. James has also coached with several programs across her local area in Texas.

In 2017, James earned her first cap with the U.S. Women's National Team 15s against England at Women's Rugby World Cup.

James has her Bachelor's Degree in Mathematics, a teaching certificate and a minor in coaching.

She heads into the 2019 Women's Rugby Super Series with six test caps.