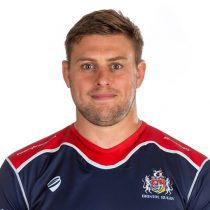 After leaving Jersey Reds at the end of the 2016/17 season, Haining linked up with Pat Lam at Bristol.

In his first year in the West Country, he helped Bristol to an immediate return to the Premiership.

He scored eight tries in 33 appearances during his two seasons in Bristol before signing for Edinburgh in 2019.

Haining became the 1108th player to represent Scotland with a starting berth against Ireland in the 2020 Six Nations on February 1, 2020.