Sale Sharks have named their side to face Bath Rugby in round 9 of the Premiership as Director of Rugby Alex Sanderson makes ten changes to the starting XV that downed high flying Bristol Bears last weekend.

Club stalwart Ross Harrison brings a wealth of experience to the Sharks pack as he returns to the starting line-up alongside Curtis Langdon and Springbok International Coenie Oosthuizen in the front row.

As the Sharks prepare for another physical encounter with Bath at the AJ Bell Stadium, the Sale coaching team opt to deploy a new-look Sale second row with J.P du Preez teaming up with James Phillips for the first time this season.

Jono Ross captains the side from openside flanker and is joined in the back-row by powerhouse twins Jean-Luc and Daniel du Preez.

In a re-shuffle of the Sale back line, only Sam Hill and Byron McGuigan remain in the starting line-up for tomorrow evening’s match. Will Cliff re-claims the number nine shirt and takes his place alongside Robert du Preez at half back.

Sam Hill continues to thrive at inside centre and is joined in the midfield by former England U20 captain Conor Doherty in the pairs first outing together. Byron McGuigan is released from Six Nations camp to take his place on the wing with Tom Roebuck and Simon Hammersley joining the Scotland winger in an exciting Sale back three. 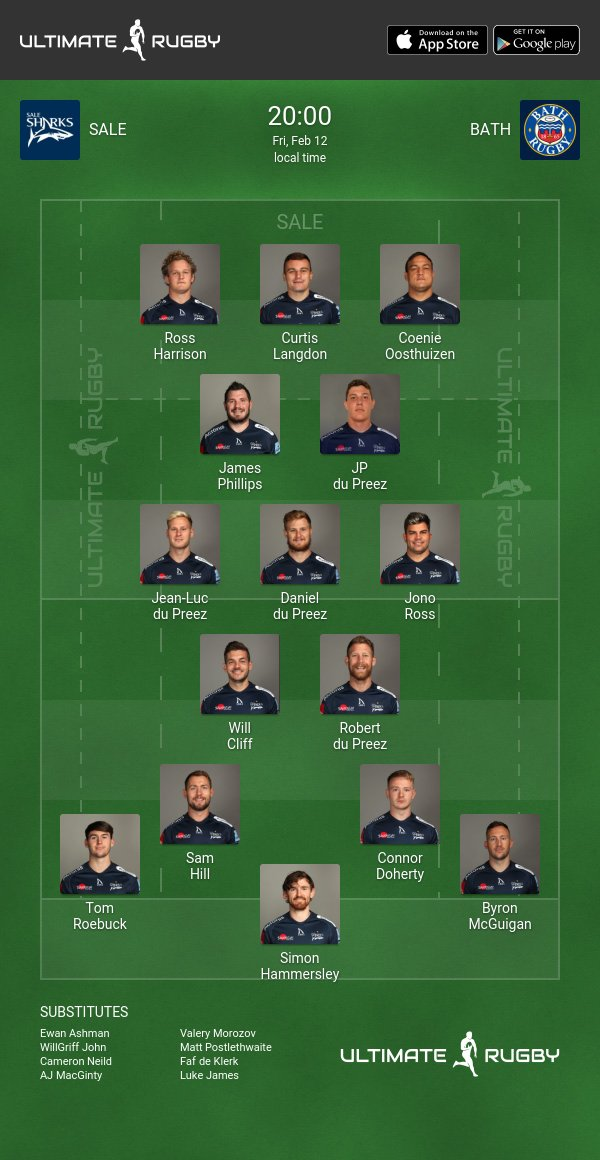 Following an impressive Bath Rugby debut last Saturday, Will Muir is set to make his first start against Sale Sharks at the AJ Bell Stadium tomorrow evening. The Blue, Black and White will be looking for the former England Sevens man to inject pace and attacking dynamism into the team once-again.

Semesa Rokoduguni retains his position on the right wing with Tom de Glanville completing the back-three at full-back.

There has been consistency in selection in the centres, with Bath opting for Josh Matavesi at inside centre and Max Clark setting up outside the Fijian.

World Cup finalist Ben Spencer will marshal his forwards from scrum-half with the experienced Rhys Priestland controlling affairs from his customary outside-half spot.

The front row is unchanged from last weekend’s outing against Harlequins as Juan Schoeman starts at loose-head prop with Christian Judge holding up the other side of the scrum. England-capped Tom Dunn maintains his role at hooker.

Fit again Josh McNally returns to the fold to captain the team from the second row, locking down alongside Zimbabwe-born Mike Williams.

In the back row, Josh Bayliss returns to his more familiar role of blindside flanker with Miles Reid operating at 7. Zach Mercer completes the pack at No 8. 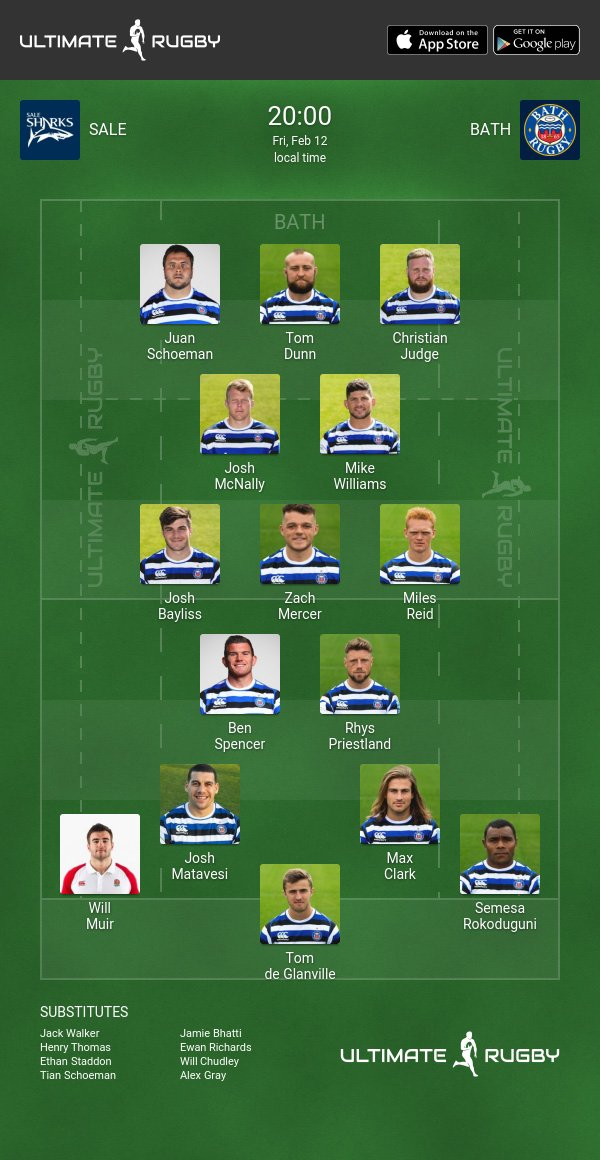