The Melbourne Rebels have selected their final Match Day 23 for this year’s inaugural Trans-Tasman competition.

The Rebels will head into Saturday afternoon’s clash eager to end their season on a high note following a trio of stirring performances against the Hurricanes, Highlanders and the Chiefs.

Melbourne will come up against a determined Crusaders side looking to respond following a closer-than-expected performance against the Western Force last weekend.

The twenty-eight-year-old joined the Rebels after returning home to Melbourne last year, following an eye-catching 2020 campaign with the Gold Coast Titans in the NRL. One of only three born and bred locals to have represented AAMI Park neighbours, the Melbourne Storm, Tonumaipea will bring plenty of Victorian pride and on-ball flair, when he runs out a Melbourne Rebel for the first time on Saturday.

Junior Wallabies’ squad member, Glen Vaihu, has been named in the starting XV for the first time this season having made five Super Rugby AU appearances off the bench earlier in the year.

Exciting duo, Andrew Kellaway and Frank Lomani, have been rewarded for their strong performances as replacements, coming in for Stacey Ili and Lachie Anderson, who are both unavailable.

Another Rebel in red-hot form is hulking Number 8, Isi Naisarani.Naisarani was involved in three of Melbourne’s season-high four tries last weekend, scoring two crucial majors himself and playing his best game of 2021, finishing with 88 metres from 17 runs, beating 6 defenders and scoring two tries - all team-highs.

Meanwhile, flying Fijian, Ilikena Vudogo, looks set to become Melbourne’s second debutant of the weekend, after being named as a replacement in what shapes as a fantastic Super Rugby introduction for the powerfully built winger.

Vudogo joined the Rebels following two successful seasons as a development player for the Brisbane Broncos in the NRL, after originally gaining attention for his impressive play at the 2018 World Rugby Uner-20’s tournament in Romania, where Vudogo claimed player of the tournament honours.

Steve Cummins has also been named to provide second-row support, wrapping up Melbourne’s final change for their last round Trans-Tasman clash.

Originally scheduled to be played at AAMI Park, this weekend’s Trans-Tasman clash will now take place at Sydney’s Leichhardt Oval, due to the recent COVID-19 outbreak in Melbourne. 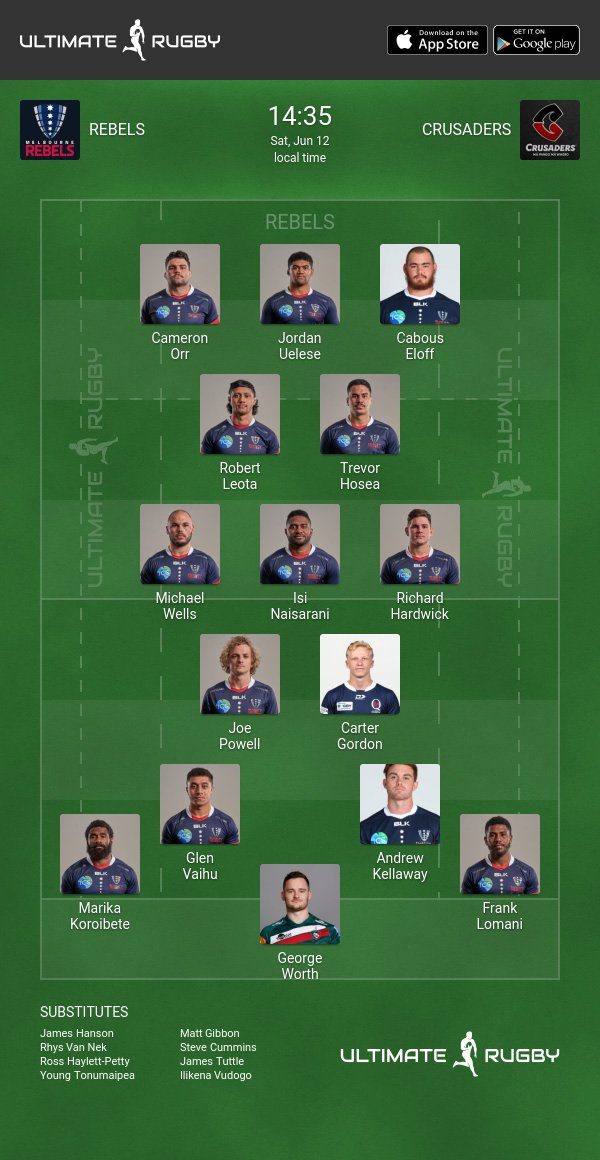