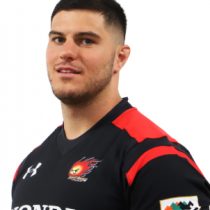 After attending Boland Agricultural Basson moved to Pretoria where he joined the Blue Bulls Academy.

In 2017 he was named in the Blue Bulls Currie Cup squad and impressed during his debut season in the competition and earned a spot in the Bulls 2018 Super Rugby squad.

He made two appearances for the Bulls during the 2018 season and continued to play for the Currie Cup side before signing for Japanese club Honda Heat in 2020.