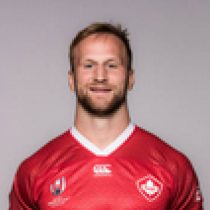 Heaton has been playing in the English third division for several years and is an intriguing former Canada U20 prospect that was named into Canada's 28-man squad ahead of their 2016 European Tour.

Heaton made his test debut against Japan in 2016 and has gone on to make 21 appearances for Canada ahead of the 2019 Pacific Nations Cup.