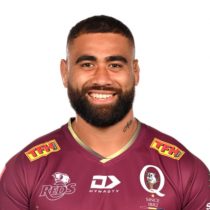 2016 proved a breakout year for the Queensland pathway product who represented his state and country at U20s level, as well as Brisbane City in the National Rugby Championship (NRC) before he made his Super Rugby debut for Queensland against the Bulls at Loftus Versfeld in Pretoria.

He won the inaugural Super U20s Championship with Queensland and was again selected to represent the Australian Under 20s.

The following year, Salakaia-Loto established himself as a regular starter for the Reds which saw him named in the Wallabies squad for the June Test series where he made his Australian debut against South Africa in Bloemfontein.

His full skillset and power were on display later in the year when he had a stellar cameo off the bench in the Wallabies’ upset win over the All Blacks in the third Bledisloe Cup Test in Brisbane.

Despite a disrupted 2018 Super Rugby season due to injury, he added a further seven Tests for the Wallabies that included starting at lock for the opening four matches of The Rugby Championship.

He would feature in 4 of the Wallabies' Rugby Championship matches and following an incident with a fan, he decided to step away from the game for the remainder of the year for family reasons.

Ahead of the 2019 Super Rugby season, Tui legally changed his name to Lukhan Salakaia-Loto to honour his stepfather following his sudden passing.

Salakaia-Loto enjoyed a more consistent season in 2019 after missing just the one match for Queensland during the Super Rugby season and followed that with World Cup selection . He was nmed in Cheika's RWC squad with 15 Wallaby caps.

The versatile forward capped off 2019 with 11 Tests and two tries during The Rugby Championship, Bledisloe Cup and Rugby World Cup before penning a new deal with the Reds and Wallabies until 2022.

In March 2022, Salakaia-Loto signed for Northampton Saints, and would arrive at cinch Stadium at Franklin’s Gardens following the conclusion of the 2022 Super Rugby campaign.