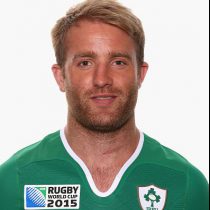 Son of former Ireland prop Des, Fitzgerald made his Blues debut in 2006. The talent of the Wicklow native was apparent from an early age and he featured in two Leinster Schools Senior Cup wins, in 2004 and 2006, with Blackrock College.

From there Fitzgerald went on to attend University College Dublin and in 2006 began both his professional and international career. Three years later, Fitzgerald was travelling on a British and Irish Lions Tour to South Africa having become a vital member of the Irish national side. However, since then, the electric winger-cum-fullback has struggled with a string of injuries meaning he was not considered for the 2011 Rugby World Cup squad.

The talented Irishman finally overcame his injury issues in 2013, and has been slowly rising back up the ranks of international rugby ever since. FitzGerald finally broke back into the squad for the final game of the 2015 Six Nations, and has since been named in the final Irish squad for the 2015 Rugby World Cup in England.

In June 28th, after suffering from a neck injury, the 28-year-old Leinster & Ireland back announced he was advised to retire on medical grounds.