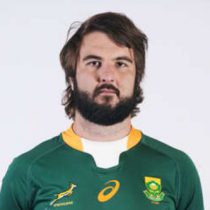 A lineout general and workhorse, Lood de Jager has grown from strength to strength in the Green and Gold jumper for South Africa.

He went on to represent NWU-Pukke in the Varsity Cup while he was studying and was included in the Leopards' Currie Cup squad, but failed to make an appearance.

His performances in the 2012 Under-21 Currie Cup did catch the eye and earned him a move to the Free State Cheetahs and he was included in the Cheetahs' final squad for the 2013 Super Rugby season.

Consistent performances for the Cheetahs earned him his test call up. He came off the bench for his test debut against Wales in July 2013 replacing Springbok legend Bakkies Botha.

He was included in the Springboks Rugby Championship squad and has been influential at the lineouts as well as in defence where he consistently shows off his superior physicality.

He went on to represent South Africa at the 2015 Rugby World Cup and replaced Victor Matfield in his final test match in the third place playoff, a changing of the guard moment as Lood took over the Springboks' lineout from that day on.

At the end of the 2016 season, de Jager signed for the Bulls.

He stayed at the Bulls until the end of the 2019 Super Rugby season before signing with Manchester-based Premiership Club the Sale Sharks.

Injuries have plagued de Jager throughout his career but he was able to remain fit to secure a place in the Springboks 2019 Rugby World Cup squad.

He went on to play an integral role in the Springboks' run to the 2019 Rugby World Cup title with the South African pack playing a crucial part of their success.

De Jager played another key role for the Springbok during the 2021 British and Irish Lions Series as South Africa claimed a 2-1 Series win.

After the competition, he featured in the Rugby Championship where he earned his 50th test cap against Argentina in August.

At the end of the 2021/22 Premiership season, de Jager departed the Sale Sharks and signed with Japan Rugby League One Champions the Panasonic Wild Knights.

He heads into the 2022 test season with the Springboks having earned 56 test caps scoring five tries.