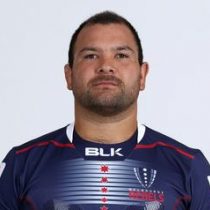 One of the most outgoing and personable members of the Rebels squad, Laurie is a similarly effervescent presence on the pitch. Technically solid and a powerful scrummager, he is also extremely mobile, having an uncanny knack to always pop up in the right place at the right time.

Having been crowned Super Rugby Rookie of the Year in 2009, Laurie is now one of the Club’s senior players. The tighthead prop will remain at the club until the end of the 2015 season and will be an integral part of the Club’s future development, both on and off the field.

Laurie is a tenacious worker, and will be striving to claim his first test for the Wallabies in 2013, having been selected in the Wallabies extended playing squad and Australian Barbarians in recent times.

He is a original Rebel having been part of the team since they were included in the Super Rugby.

With 95 caps, he is the highest capped Rebel and is regarded as one of the best scrummagers in Australia.

The Rugby Players Association Newcomer of the Year 2009