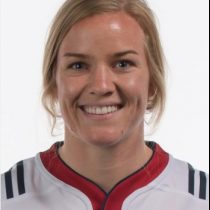 Sommer played football in America for the University of California before discovering rugby and going on to play for Seattle Saracens.

She won the 2016 Club Women's Division I National Championship with Seattle Saracens and went on to make her debut for USA.

She has represented her country in sevens and fifteens and after representing USA at the World Cup she signed for the Harlequins Ladies.

She heads into the Women's Rugby Super Series with 5 test caps and 1 World Series.