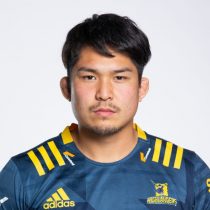 A powerful utility forward, Kazuki Himeno quickly make his mark in Japanese rugby as he was called into the test squad after just nine Top League appearances for Toyota Verblitz in the Top League.

Himeno started his club and test career in the second row but has become more accustomed to the back row as his career has developed.

The back-rower made his test debut in the second row against Australia back in November 2017 and scored his first test try in the match.

Himeno quickly cemented himself as a go to starter for Japan in 2019 and started in all four of Japan's pool phase matches at RWC 2019 as well as Japan's first ever Rugby World Cup quarter-final.

Playing in the back row, Himeno was one of the standout stars of the Rugby World Cup as Japan beat both Scotland and Ireland to top their group.

By the end of the Rugby World Cup, Himeno had 17 test caps to his name with his outstanding form leading to a Super Rugby contract with the Highlanders in 2021.

Himeno has 11 Super Rugby caps for the Sunwolves scoring two tries during the 2018 season.