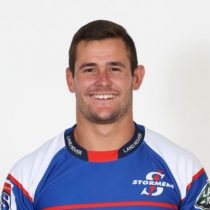 Having attended school Queenstown where he earned a few call-ups to the youth sides of the Border Bulldogs.

At high school level, he played for Queen's College and represented Border at the Under-16 Grant Khomo Week in 2010 and the Under-18 Craven Week in 2011.

He was also eligible to play at the 2012 Craven Week but was not picked as he had agreed to join the Pretoria-based Blue Bulls and fell foul of a newly-adopted Border Rugby Football Union policy of not picking players for their Craven Week squad that already signed contracts with other unions.

He made just one appearance for the Blue Bulls U19 side in the 2013 Under-19 Provincial Championship, playing off the bench and slotting a conversion in a 56-7 win against former side Border U19 in East London.[

His first class career started in the 2014 Vodacom Cup. After being an unused substitute in their matches against Griquas and the Pumas, he made his debut for the Blue Bulls in their match against the Leopards XV in Leeudoringstad, kicking two conversions in the match as they secured a 30–26 victory.

He was included in the Blue Bulls' Currie Cup side for the 2014 Currie Cup Premier Division and was named on the bench for their Round Three clash against the Eastern Province Kings in Pretoria. He did not make an appearance in that match, but was promoted to the starting line-up the following week for their match against Western Province.

Stander was a points machine Joshua Stander during the 2017 Varsity Cup and earned a spot in the Blue Bulls senior squad.

He featured for the Bulls during the 2017 Currie Cup before signing for the Stormers.