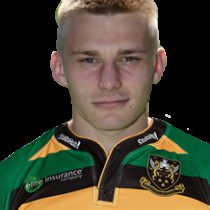 The 22 year-old has been sidelined throughout the whole of this season, after picking up a serious injury in the Green & Whites' friendly at London Irish back in August, and with the former England Under-18 international scoring the opening try in the previous pre-season friendly fixture against Newcastle Falcons, head coach Ian Costello was resigned to losing one of his most dangerous attacking threats for the current campaign.

Josh Skelcey has committed himself to Nottingham Rugby for the 2017/18 season, signing a new one-year deal at The Bay.