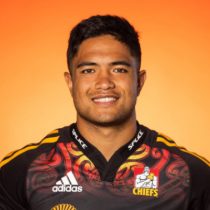 His composure and running skills caught the eye of the Highlanders coaches, who called him into the Highlanders wider training squad in December 2016, for pre-season training.

While he didn’t take the field in 2017, Ioane continued to develop his game and become accustomed to the higher level. He made his provincial debut later that year and eventual Super Rugby debut in 2018.

His form with the Highlanders earned him a place in the Maori All Blacks squad in 2018.

He took his game to another level in 2019 as the first choice 10 for the Highlanders taking his Super Rugby cap tally to 22 before he was named in All Blacks' Rugby Championship squad as one of four uncapped players.

Ioane made his international debut for New Zealand against Tonga on 7 September 2019, having been recalled as an injury cover for Richie Mo'unga.

He replaced Beauden Barrett at half-time, scoring 8 points on debut.

In August 2021, Ioane was released from the last year of his contract at Highlanders to enable him to explore other opportunities.

The following day the Chiefs announced the acquisition of the Maori All Black for the 2022 season.