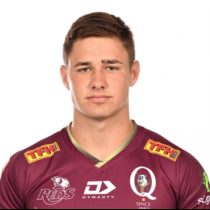 After graduating on a GPS title win alongside Brumbies playmaker Reesjan Pasitoa in 2018, Flook would cap off a monumental first season out of school.

He captained Australian Schools & U18s before being named Queensland's U19s Player of the Year in 2019.

As well as being part of the Brothers Rugby Club squad that took part in the Queensland Premier Rugby grand final, the talented centre's displays secured his name in the Junior Wallabies' 57-man squad for the Oceania Rugby U20s Championship.

At the back of a massive 2019, Flook showed no signs of rest the following year, impressing his way into the Reds' Super Rugby squad as one of four new faces and made his Super Rugby debut against the Rebels in July 2020.

In September 2021, he became the first player in Australia to have signed through 2024 after inking a contract extension with Queensland.