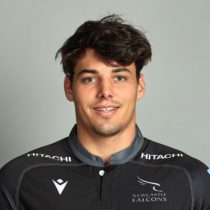 Born in Wexham, Buckinghamshire, Josh Basham joined the London Irish Academy at the age of 15, captained the U18 team, along with Wellington College and has also been with Tanglin RFC in Singapore.

Before breaking into the England U18 squad and making his debut in the 43-14 win over France at Aylesbury in March, he had represented his country at U16 and U17 level in the past two years. He toured South Africa with the England U18 side

Basham broke into the London Irish side during the 2017/18 season and joined Newcastle Falcons towards the end of the 2018/19 season. He represented England U20 in the 2018 & 2019 World Championships.

He made 20 first team appearances for the Falcons during his time on Tyneside, before re-joining London Irish ahead of the 2022/22 season.