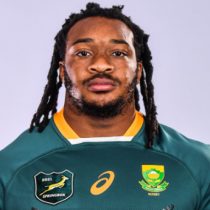 A powerful and mobile hooker, Joseph Dweba has all the skills required of him as a modern day hooker without giving up on the core skills at the lineout and scrums.

Dweba cut his teeth at Hoërskool Florida where he earned his first provincial colours as he as wselected for the Golden Lions Under-16 side that played at the Grant Khomo Week competition.

He also represented the Golden Lions two years later, this time in the premier South African high school rugby union competition, the Under-18 Craven Week with his performance leading to his inclusion in the SA Schools team.

After school, he moved to Bloemfontein to join the Cheetahs and remained in the thoughts of the national selectors as he was called up into the South Africa U20 squad for the 2014 IRB Junior World Championship in New Zealand finishing as runners-up in the competition.

He returned to domestic action for the Free State U19 side (2014) and after playing a single match for Bloemfontein Crusaders in the 2015 SARU Community Cup. He was included in the Free State XV for the 2015 Vodacom Cup competition, making his provincial first-class debut against SWD Eagles.

He represented the SA u20s once again in 2015 before making his Currie Cup debut in 2017 against Boland and his Super Rugby debut 2 July vs Western Force later that year.

An injury to Jacques du Toit during the 2018/19 season saw Dweba being promoted to the starting side in what would be a breakout 2018/19 season for the rake.

He has since cemented his place in the starting XV and has been strongly tipped to become a Springbok in the not too distant future.

In May 2022 it was announced that Dweba would be returning home to South Africa and take up with the Stormers, with whom he signed a three-year deal.