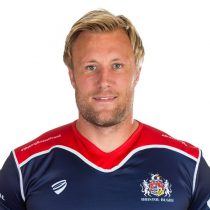 The strong ball-carrying No.8 has proven to be a excellent loose forward with the skills to get stuck in and win the hard yards up front, but also link with the backs when required.

Crane suffered a serious knee injured that forced him to miss out on the 2011/12 season, but cemented himself back in the Tigers mix. He was a goalkeeper at West Bromwich Albion as a junior, but chose to focus on his rugby and went on to captain England at both Under-18 and U21 level. Big things will be expected of the No.8, who has a proven try-scoring record.

Crane joined Bristol Rugby on a three-year deal in the summer of 2016.

The back rower spent ten years at Welford Road, making over 250 appearances in the top flight.

Crane has three England caps to his name and has skippered his country at age-group level.

In 2018, Crane captained Bristol to the Championship title. After 56 appearances for the Bears, he signed an extension to remain at Ashton Gate until 2020.

In 2020, the former England international brought his playing career to an end and linked up with Pat Lam’s backroom staff on a full-time basis and is responsible for assisting with the Bears U18s and Senior Academy programmes.