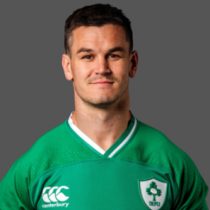 A schools rugby legend, Sexton’s late drop goal won St. Mary’s the 2002 Leinster Senior Cup Schools final. Sexton’s impressive form for his school and club, St.Mary’s RFC, saw him selected to play for Leinster firstly in 2006. Known for his versatility, Sexton can play full back, centre, or fly half.

He played for Ireland Schools, Ireland U21s, won the Churchill Cup with the Wolfhounds in 2009, and scored 66 points for Ireland A in 11 appearances.

Sexton is known for his distribution and exceptional vision. At 28 years of age, Sexton has all the attributes to see him become one of Ireland’s greatest ever fly halves. Sexton replaced Leinster legend Felipe Contepomi as Leinster’s first choice fly half and has since exceeded the Argentines achievements. He scored 16 points on his debut against Fiji in a 41-6 win on 21 November, 2009 (five conversions, two
penalties) in his native Dublin.

At Irish level, too, Sexton has had competition from a legendary figure, Ronan O’Gara. Sexton was Ireland’s first choice fly half in the 2011 World Cup. To date, Sexton has won 51 Irish Caps, and has various medals for Leinster, including three Heineken Cups.

Having been selected to travel with the 2013 British and Irish Lions touring party, the mercurial 10 was an early test certainty, and played a pivotal role in all three tests which culminated in an historic victory over the Australians, a first Lions series win in 13 years.

In 2013, after six immensely successful season at Leinster, which included over 100 caps, Sexton made the move to France, becoming one of the worlds best paid players at Racing Metro. He played an influential role in helping Ireland win back to back Six Nations campaigns in 2014 and 2015.

Following speculation during the summer of 2014, Sexton signed a contract to bring him back to Leinster for the 2015/16 season until at least November 2019. For Ireland, the 2015 season was another successful one for the Dublin native, as he lead Ireland to victory in the 2015 Six Nations championship.

One of, if not the best, fly-halves in the world, Sexton was selected in the Irish squad for the 2015 World Cup squad. He became only the third Irishman to tally 500 test points in the RWC2015 opening pool game v Canada.

Missed starting only 1 game in the last 3 Championships, taking the title in 2014 & 2015. Ireland's top points scorer all 3 years.

Sexton is reaching the twilight of his successful career. He missed this summer's tour to South Africa following shoulder surgery from an injury sustained during the Pro 12 final. He will be eager to be a part of next summer's British & Irish Lions squad to tour New Zealand.

The Leinster out-half damaged his right hamstring in the defeat to New Zealand at the Aviva Stadium after struggling with his left hamstring in the lead-in to November. However he returned for Ireland in the 2017 6 Nations, as they finished runners up to England.

For the second time in his career, Sexton was named in the British and Irish Lions squad to travel to NZ.

Ahead of the 2018/19 season, Sexton was confirmed as Leinster captain, with fellow Ireland international Rhys Ruddock his vice-captain.

His 44 points in Ireland's grand slam-winning 2018 Six Nations campaign were the third-highest of the season behind the 50 by France's Maxime Machenaud and the 49 by Wales' Leigh Halfpenny.

In November 2018, he was named World Rugby Men’s 15s Player of the Year 2018 at the World Rugby Awards, becoming the first Irish player to win the award since Keith Wood claimed the inaugural accolade in 2001.

December 2018 saw him sign a contract extension with the IRFU until at least 2021.

In a recent interview Sexton admitted that he was a Man U fan and not a Liverpool one as most people thought. He also said that Sean O Brien was the best forward he had played with and Isa Nacewa and BOD the best backs.

As of May 2019 he had 83 appearances for Ireland and was selected in the RWC Training Squad ahead of the World Cup.

He finished the tournament with 88 caps for Ireland, and as of November 2019 he has represented Leinster on 160 occasions, scoring 1446 points.

He heads into the 2019 Champions Cup with 59 appearances in the tournament and 611 points scored.

Sexton has been named for the 2020 Six Nations Ireland squad and has 88 caps. He has also been named as Captain.