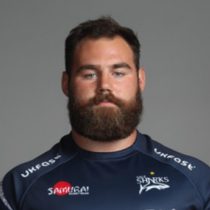 Jones spent time with Welsh Premiership clubs RGC 1404, Cardiff and Pontypridd while with regional side Cardiff Blues before joining Perpignan.

In March 2018, it was confirmed that Jones, who had won five caps for Wales U20s, will move to Sale after spending two years in France's second division.

As of May 2020, he has made 29 appearances for the Premiership club.

In June 2020, he signed for Championship side Doncaster Knights.