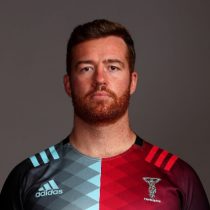 Gray is a powerful hooker that moved through the academy set up at Northampton before making his senior debut in 2007. He went on to play 20 times over 3 seasons before signing for Harlequins.

While at the London club he went on to win the Premiership title as well as winning his only England cap which was against the All Blacks in 2014.

He represented England Saxons as well as the U20 side before that.

In August 2018 he signed a short term deal to return to Saints as injury cover.

In January 2020 he re-joined Harlequins to add depth and experience to the squad that was heaped with injuries.

Nicknamed “Grazer” he admires Jonny Wilkinson as his sporting hero and was once asked to sign a baby for a supporter.

A Harlequins stalwart with over 150 Club appearances to his name since debuting for the London side in 2010, Gray extended his stay with Harlequins in April 2021 by signing a new deal with the club.